Institutes of Research and Education

Theme: The Next Generation of Green Technology

With AVP Chang D. Yoo as the new ASPIRE chairman for the 2011-2012 term, the Korea Advanced Institute of Science and Technology (KAIST) organized the 2012 ASPIRE Forum at KAIST from July 11th – 13th. The 2012 ASPIRE Forum was organized through a series of presentations and discussions, including the 2012 ASPIRE Symposium, Vice Presidents and Senior Staff Meeting, and Student Workshops under the theme, “The Next Generation of Green Technology,”. Member universities exchanged ideas about activities and methods of implementation under the framework of the ASPIRE League. Ultimately, the consortium will plan and develop joint activities among the five member universities in order to form a hub for innovation in Asia through the advancement of science and technology and the development of human resources, thereby contributing to the realization of a sustainable world.

The opening remarks made by Prof. Kyoung-Wook Paik, Vice President of Research, and the introduction made by Prof. Chang D. Yoo, Associate Vice President and Chairperson of the 2011-2012 ASPIRE League, marked the beginning of this year’s symposium, which was themed, “The Next Generation of Green Technology.” Representatives from the Hong Kong University of Science and Technology (HKUST), Nanyang Technological University (NTU), Tsinghua University, Tokyo Institute of Technology (Tokyo Tech), and Korea Advanced Institute of Science and Technology (KAIST) made presentations on each university’s effort to tackle issues related to energy and the environment. Participants from three member universities conducting joint research under the satellite lab program of Tokyo Institute of Technology (Tokyo Tech) made presentations and also provided a brief introduction of their projects. After the symposium, a Welcome Reception was held at the International Center where vice presidents, professors, administrative staff, and students enjoyed to mingle with one another.

On the following day, the Vice Presidents and Senior Staff Meeting was held to discuss more detailed plans regarding the implementation of the league’s future activities. The Vice Presidents and Staff meeting started off with Chairperson Chang D. Yoo’s opening remarks. In his opening, he thanked all the representatives for attending and expressed his hope for a successful meeting. Following his welcoming remark, he mentioned that throughout his year as chairperson, he realized the importance of this alliance and that the collaboration with universities with common needs is all the more important. He then closed by going over the meeting agenda. Following the opening address, Professor Satoru Endo from Tokyo Tech gave the annual report on ASPIRE League Activities.

The Vice Presidents then made their presentations on the path that this strategic consortium should take in the future, with many of them sharing information about current activities under the ASPIRE League and potential collaborative projects that could be implemented amongst member universities. In the discussion sessions, the Vice Presidents talked more specifically on the future direction of the ASPIRE League, particularly the need for more funding of Satellite Labs in order to run multilateral collaborative projects amongst member universities. The Vice Presidents showed much interest in developing more projects and programs that all member universities could work on simultaneously. In conclusion, all member universities supported the concept of satellite labs and felt that this is something that needs to be expanded into multilateral and nationally significant projects, as such labs will stimulate the collaboration between member universities and transform the ASPIRE League into a bigger and stronger force. Each member university needs to look for funds for satellite lab research, and representatives agreed that an area of focus, or a theme, would be necessary to enhance the focus and impact. Additionally, this year also marked the end of KAISTrea of focus, or cir University, and Tsinghua University decided to become the next Chair University and to carry on the responsibilities as Chair for the next two years. 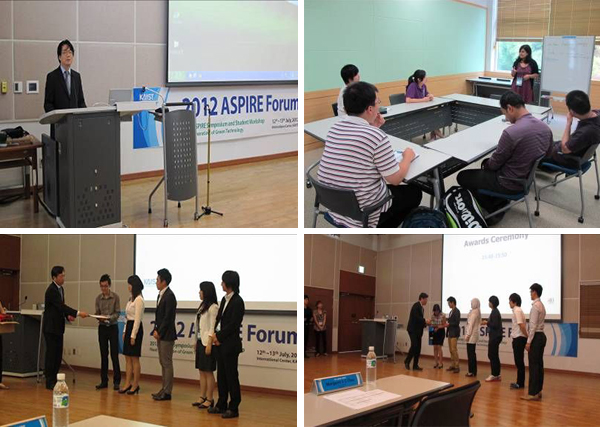 Student Workshops Ⅰ & Ⅱ were held on the morning of July 12, and Student Workshop Ⅲ was held in a parallel session to the Vice Presidents & Senior Staff Meeting on July 13 at KAIST’s International Center. A total of 31 student participants from five member universities were divided into five groups and held discussions on the three subthemes: Renewable Energy Technology, Energy Harvesting Methods, and Energy Conservation (saving) Technologies for the Future. As the finale of the Student Workshop, each group made presentations to the vice presidents and senior staff. The top two student groups, as evaluated by two representatives from each of five universities, received awards. The award for 1st prize went to group C and 2nd prize to group E