Institutes of Research and Education

Theme: The Development and Utilization of New Energy

The Student Week began with an orientation session on July 7 in preparation for the week-long program to come. Between July 8 – 10, twenty-nine students from ASPIRE League member universities and two students from IDEA League member universities (Delft University of Technology and RWTH Aachen University) went on a study trip and visited new energy development areas, such as the Dezhou Economic-Technological Development Area in Dezhou City, Shandong Province. They also visited the Yingli Group in Baoding City, Hebei Province; the Tsinghua Solar Company in Beijing; and the Sino-Italian Tsinghua Environment and Energy-efficient Building at Tsinghua University.
Students attended the ASPIRE Symposium in the morning of July 11. The Student Workshop took place in the afternoon of July 11. Students were divided into three groups and held discussions on the following three subthemes: The Status Quo and Future of New Energy Development, The Role of Education in New Energy Development and Utilization, and The Transformation of Lifestyle with New Energy Utilization. Each group made presentations in front of the vice presidents and senior staff on the morning of July 12. Following the student presentations, Professor Joseph H W Lee, Vice President for Research and Graduate Studies of HKUST, made some general remarks on the three student group presentations.

Opening remarks were made by Professor Si Yuan, Vice President of Tsinghua University, and Chairperson of the ASPIRE League for the two-year period beginning in January 2013 and ending in December 2014. The Symposium’s theme was “The Development and Utilization of New Energy.” Symposium speakers from member universities noted the necessity for new and renewable energy research and outlined their own universities’ research activities and/or projects in the fields of new energy.
Three Tokyo Tech Principal Researchers outlined their joint research projects, which are conducted in collaboration with co-researchers from ASPIRE League member universities, under the ASPIRE League Research Grant supported by Tokyo Tech.

The Vice Presidents and Senior Staff Meeting began with Chairperson Professor Si Yuan’s opening remarks, in which he welcomed all participants. Following the opening remarks of the Chairperson, Professor Hisakazu Mihara of Tokyo Tech gave the annual report on ASPIRE League activities.

The ASPIRE Forum 2013 concluded with a study visit with all participants to the Institute of Nuclear and New Energy Technology at Tsinghua University. 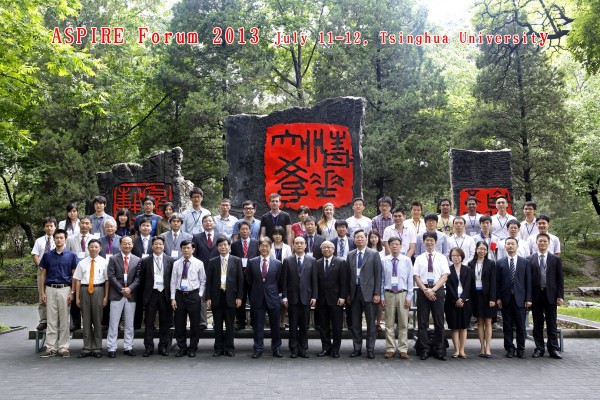